Posted on February 23, 2015 by chocologytoday 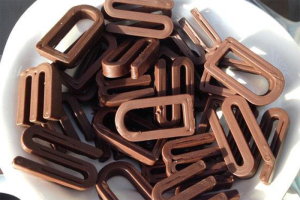 How would you feel if we told you that one day soon, you’ll be pushing aside your double boiler, candy molds and decorator tips for a food grade 3 Dimensional printer? It’s a real possibility that this appliance will be sitting on your kitchen counter in the coming years!

3D printers are all the rage these days. You can’t go to a maker’s fair and NOT see some form of 3D Printing going on.

“3D printing (or additive manufacturing, AM) is any of various processes used to make a three-dimensional object. In 3D printing, additive processes are used, in which successive layers of material are laid down under computer control. These objects can be of almost any shape or geometry, and are produced from a 3D model or other electronic data source. A 3D printer is a type of industrial robot.”

You’ve probably seen the process of printing industrial parts for a machine or perhaps you’ve seen things such a vases and cups created by a 3D printer with plastics. But did you know that food grade models are now being manufactured to…ahem – make chocolate art?

The Hershey Company, along with 3D Systems is a leading innovator in this new technology. Unveiling their sleek and elegant 3D chocolate printer, called the ChocoJet last year at the Hershey’s Chocolate World Attraction, Hershey aims to produce elaborate chocolate designs using White, Milk and Dark chocolate. Surely very soon, Hershey will be offering customized chocolate designs for customers around the world, simply by uploading an image to a computer.

You’ll be fascinated with  Hershey’s promo video of the  ChocoJet. 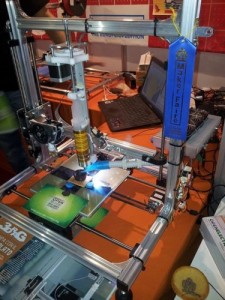 Watch what they did with chocolate in this video:

When Chocology learned of this up and coming technology we went on a search for others that are researching and learning more about food grade 3D printing. In our research we stumbled upon a young man, Albert Cai, who is interested in innovative research involving 3D printing.

Albert is currently a freshman at the University of Pennsylvania. He’s from Corvallis, and he worked  at Oregon State University, under the supervision of his mentor Travis Walker, Assistant Professor of Chemical Engineering at the same university, during the summer between Albert’s high school graduation and college. They set out to make a 3D chocolate printer with Lego! Albert was tasked with helping build modules to train middle school teachers how to teach 3D printing in their classrooms. He decided to embellish it for a summer project.

Teaching himself to write code in one month, Albert endevored to make a 3D chocolate printer out of sophisticated Lego sets. It took him one month to make a working printer. Albert said, “I found it to be a challenging and rewarding project! The project involved a little bit from a lot of disciplines, from mechanical engineering and fluid dynamics to computer science. I enjoyed putting everything together and applying it all. I think the most powerful application of the project for future use would be as an educational tool–I learned a lot about how 3D printers work and had a lot of fun doing it.”

When his professor was asked what they would do differently in the next build, he replied, “Make a better extruder and hopper with better temperature controls.”

We want to thank Professor Travis Walker as well as his intern, Albert Cai for sharing their process with us. Who knows? Perhaps Chocology will set out to make a 3D chocolate printer of our own one-day!

You may not find Chocolate 3D printers lining the shelves at Target this week, but with all the buzz around 3D printing, it’s sure to become a reality in the very near future.

We’ll keep our eye on it and keep you updated on the development of 3D chocolate printers and their progress. Stay tuned for more blog posts on the future of chocolate making.